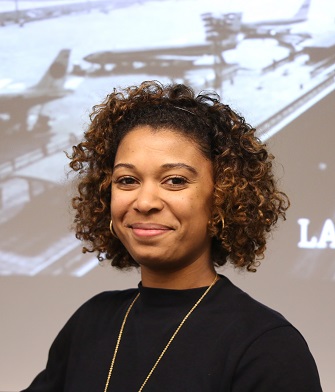 Lauren’s work focuses on the aesthetics of blackness and popular culture. She is currently writing a book on hip-hop visual culture and black spatial practice and has published writing on a wide variety of “art objects” including WorldStarHipHop.com, the videos from Jay-Z’s 4:44, Peter Eisenman’s architectural designs, and Meghan Markle’s wedding. Lauren is a founding member of liquid blackness, a research project on blackness and aesthetics, and is the co-Editor of liquid blackness: journal of aesthetics and black studies (Duke University Press). Her writing has appeared in The Journal of Cinema and Media Studies, The Black Scholar, Black Screen Media Camera, Film Criticism, The Los Angeles Review of Books, The Quarterly Review of Film and Video, Docalogue and the edited collection Writing for Screen Media (Routledge, 2019).

with Alessandra Raengo, “There is No Form in the Middle: Kevin Everson’s Massive Abstractions,” liquid blackness journal of aesthetics and black studies 5, no. 2 (Fall 2021)

Reviews and Other Writing