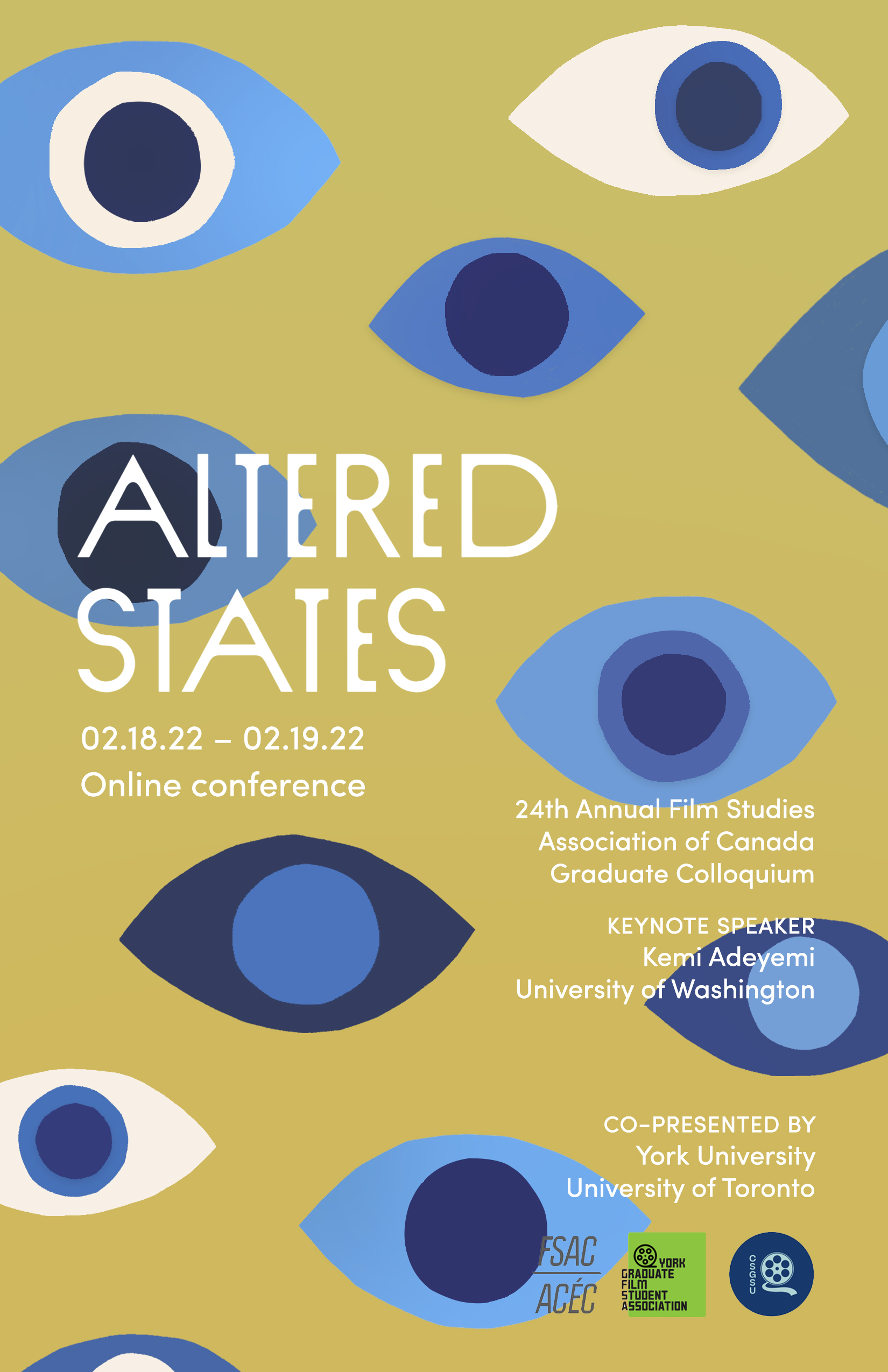 Nothing exists that doesn’t have this senseless sense – common to flames, dreams, uncontrollable laughter – in those moments when consumption accelerates, beyond the desire to endure. - Georges Bataille, The Impossible

But there is another way of going to the movies… by letting oneself be fascinated twice over, by the image and by its surroundings... ready to fetishize not the image but precisely what exceeds it: the texture of the sound, the hall, the darkness, the obscure mass of the other bodies, the rays of light, entering the theatre, leaving the hall; in short, in order to distance, in order to ‘take off,’ I complicate a ‘relation’ by a ‘situation.’ - Roland Barthes, “Leaving the Movie Theatre”

The experience of an altered state requires some sort of excess, where things become too much and the line between pleasure and pain is blurred. In political terms, to alter or revolt against the state implies an excess of action and affect, towards a possible change in the order of things. Faced with the disintegration of our institutions, ongoing environmental degradation, and endemic colonial and racial violence, we risk falling into cynicism and a fatalistic acceptance of dissolution and collapse. Meanwhile, a surreal feeling pervades as the pandemic confines us to our ‘private’ spaces amidst ongoing digitization that frustrates any sense of a public/private divide. When do film and media catalyze altered states, in their many iterations? How can media that resists conventional form destabilize our perception? What does it mean to be altered by another or by an experience?

While the theme of altered states immediately invites questions of interiority and subjectivity, we welcome submissions that work through a wide range of media and methodologies, including psychoanalytic and affect theories to new media analyses of state-generated impingements. How can we realize Barthes’ evocation of the potential for cinema and media to “fascinate us twice over, by the image and by its surroundings?” Vivian Sobchack famously asks us to consider the correspondence between cinematic representation and embodied perception, naming coenaesthesia “the potential and perception of one’s whole sensorial being.” Moving beyond representation, Scott Richmond takes up the possibility for fascination and dis/re-orientation and conceives of cinema as an aesthetic technology where the intentional object is the spectator’s body, making illusions and hallucinations central to cinema’s modulation of perception.

Scholars of gender and technology like Donna Haraway describe this increasing imbrication of subjective experience and technology under capitalism as “an imaginative resource” and a potential site for the transformative potential necessary to surmount our seeming impasse. When thinking through ways of “staying with the trouble,” Frank B. Wilderson III might suggest an improvisational imperative, so as “to stay in the hold of the ship, despite fantasies of flight.” Historically, moving image makers have navigated the use of technology for resistance and decolonization. Following Walter Benjamin, it is “only when in technology body and image so interpenetrate that all revolutionary tension becomes bodily collective innervation, and all the bodily innervations of the collective become revolutionary discharge.” Revolutionary Third Cinema manifesto authors Fernando Solanas and Octavio Getino place anti-imperialism at the “service of life itself, ahead of art; dissolve aesthetics in the life of society: only in this way, as [Frantz] Fanon said can decolonization become possible.” As Dziga Vertov urges, “WE believe that the time is at hand”!

While altered states of consciousness may initially evoke subjective experiences, these modes are deeply relational. We hope to draw upon recent approaches from Black and Indigenous studies, queer and trans studies, and other decolonial perspectives to address altered states through an intersectional lens. As such, we invite papers from film and media studies, visual studies, and other related fields. In addition to traditional conference presentations, we welcome video essays and other writerly and artistic explorations of our theme. 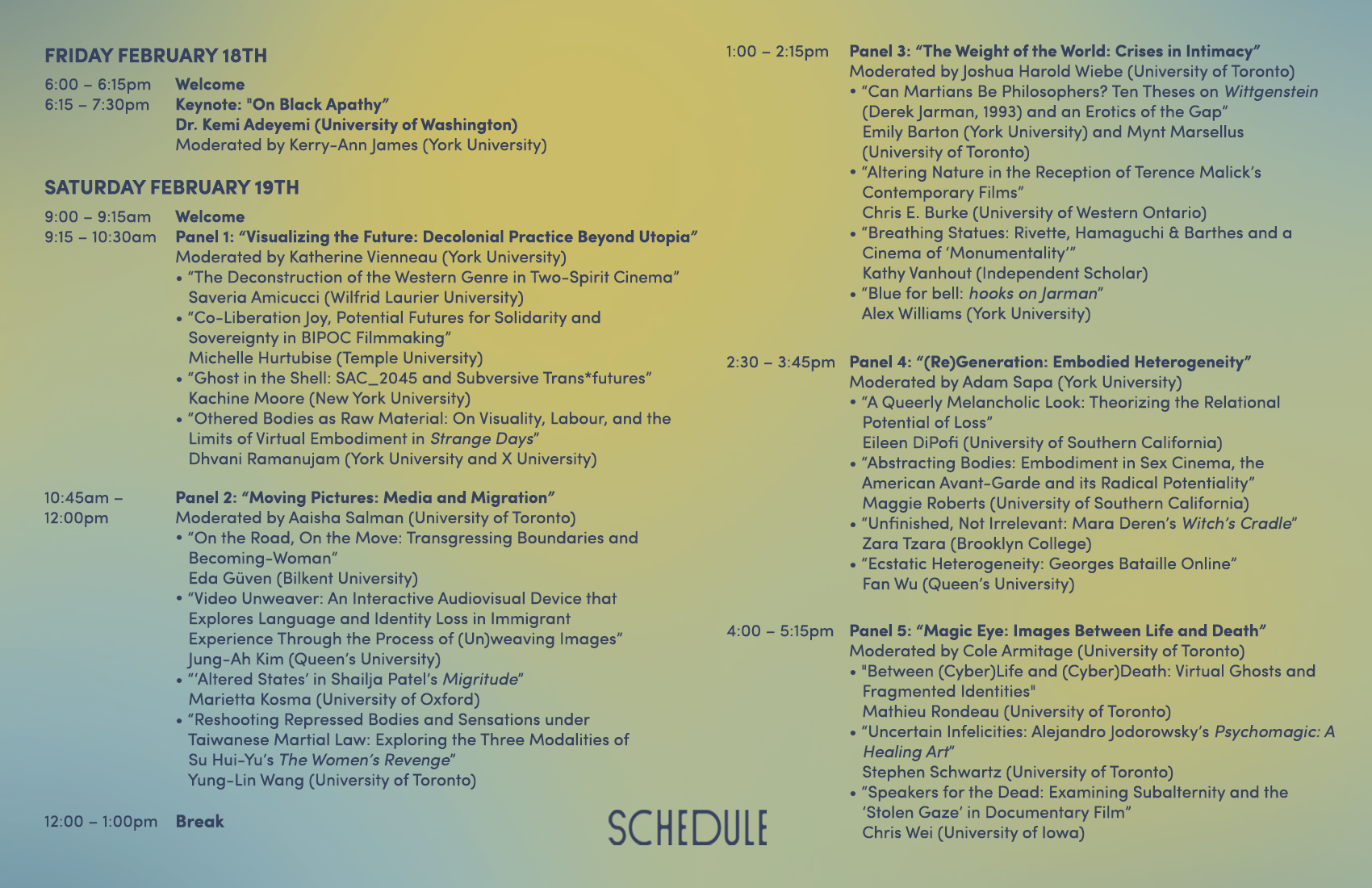 If you have any questions, please do not hesitae to contact us at csgraduatestudentunion@gmail.com.